HELP US SAVE OUR FEEDING PROGRAM 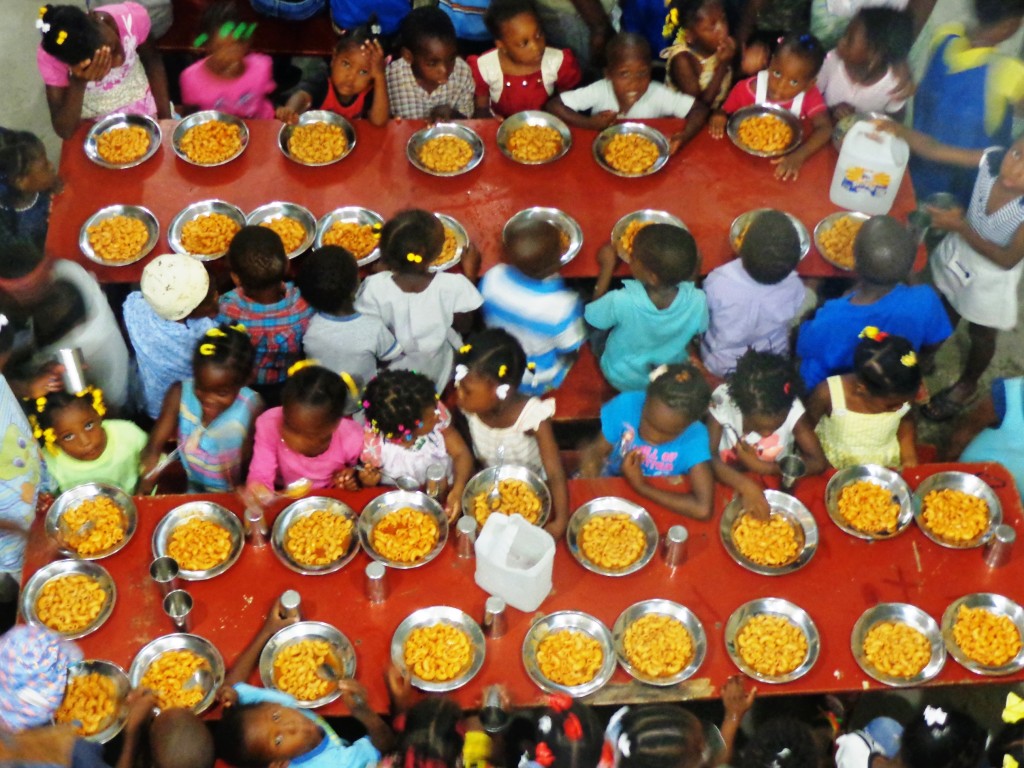 As you are probably aware, the Canadian dollar is very low.  To avoid a larger deficit with our feeding program, we have begun serving pasta, to the children, instead of rice and beans; the national dish in Haiti. 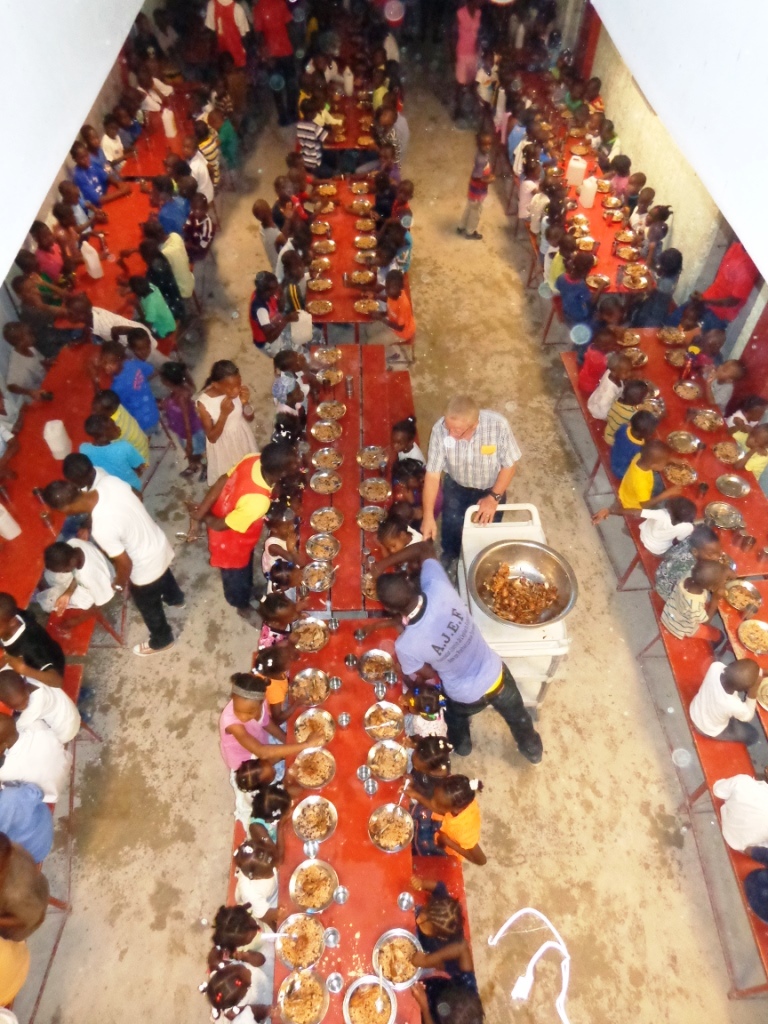 Unfortunately, the amount of support we are receiving from churches and other donors has fallen by 40% in 2015 compared to 2014.

While there are still funds in the account from previous years, if ERDO keeps sending the same monthly amount, the balance in the account will be gone by September 2016.  At that point ERDO will only be able to send out what comes in so the account does not go into a deficit position, i.e. $1,800 per month.  This will be effective on April 1st, 2016.  We will have to serve the children one meal a week instead of two. This is a major setback.  In order to keep the funds coming, we need to connect with our supporters and churches to ask them to send funds for our feeding program.

The good news is that you can help us save our feeding program.  You may make a donation to ERDO

Click on link. Select “Other” from the drop-down menu. Type “Haiti Feeding Program” in the box.

This is the webpage advertising the feeding program. The link is broken right now, but they are working on fixing it. As the donor’s names are not given us, if you make a donation, could you please tell us using this email address: mlcharb@haitiministries.com. The children will greatly appreciate your help. Thanks. 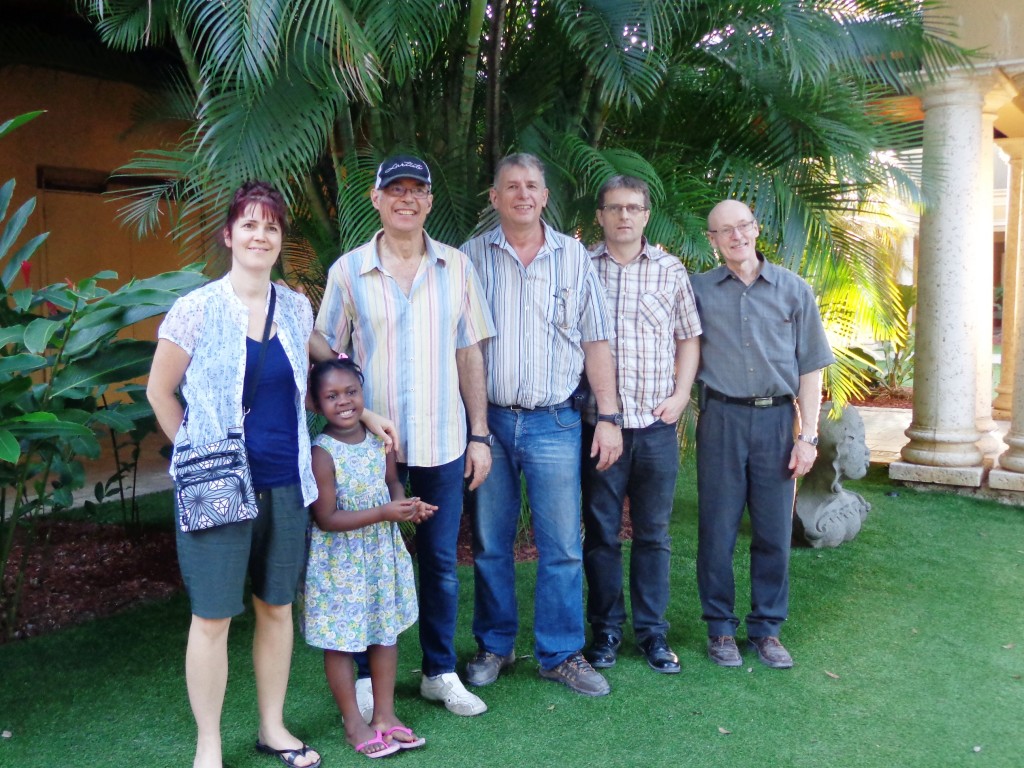 A team from St-Hyacinthe and Trois Rivieres, QC, came to help us with many tasks. 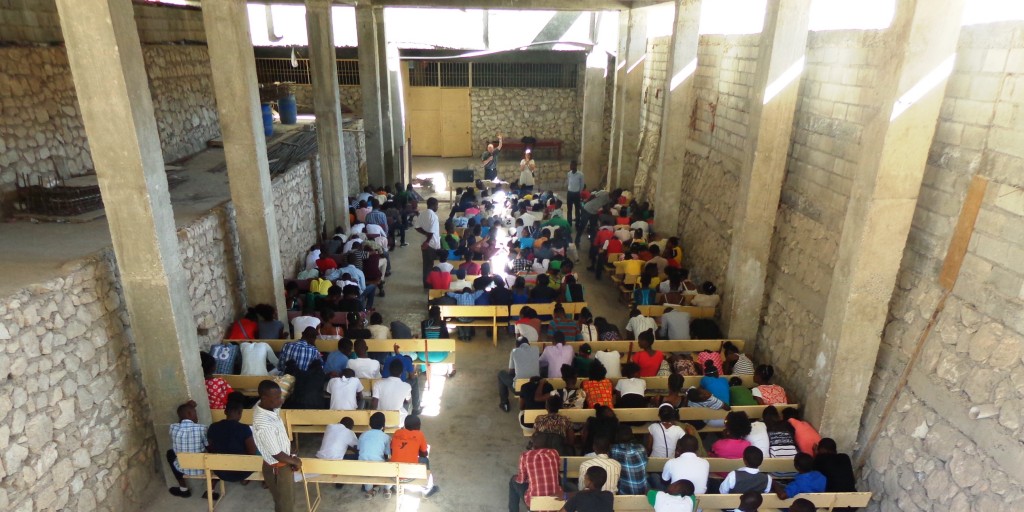 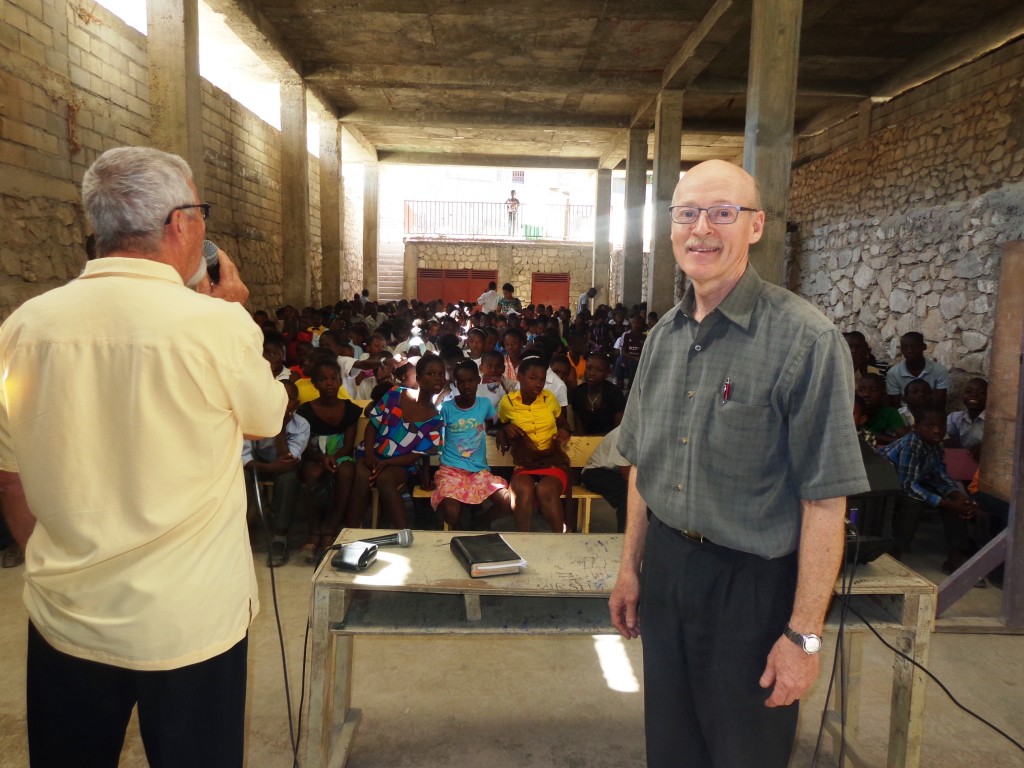 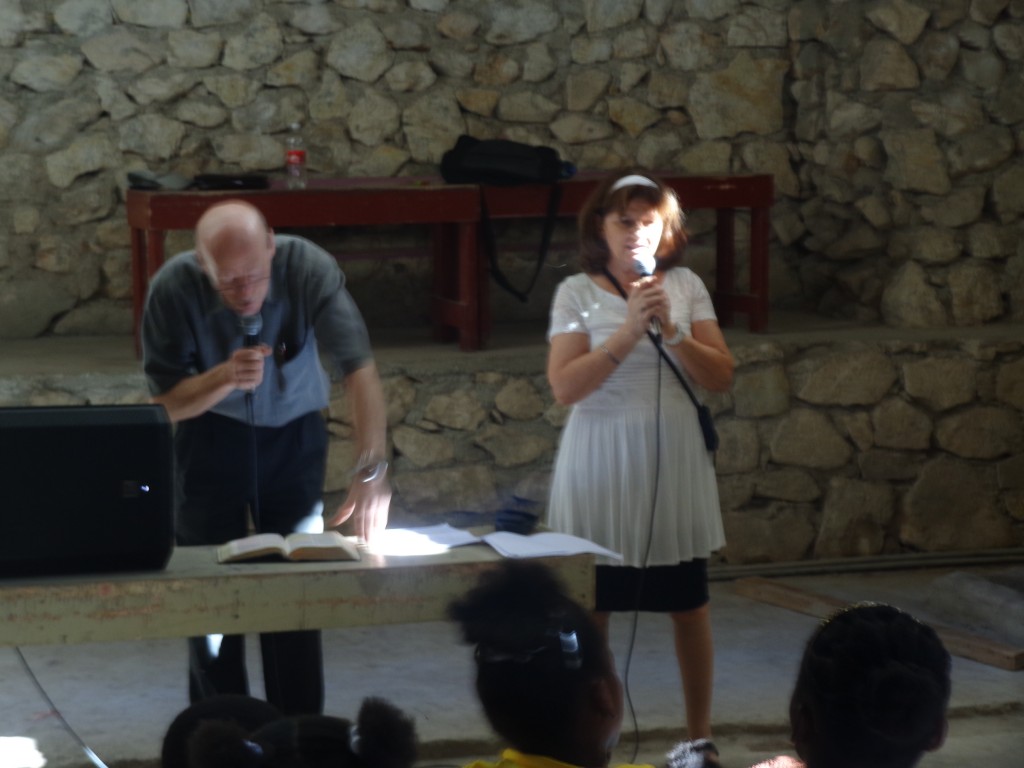 On Sunday morning Pastor Alain from Trois Rivieres, QC, spoke at our service to the 12 to 15 year old age group. 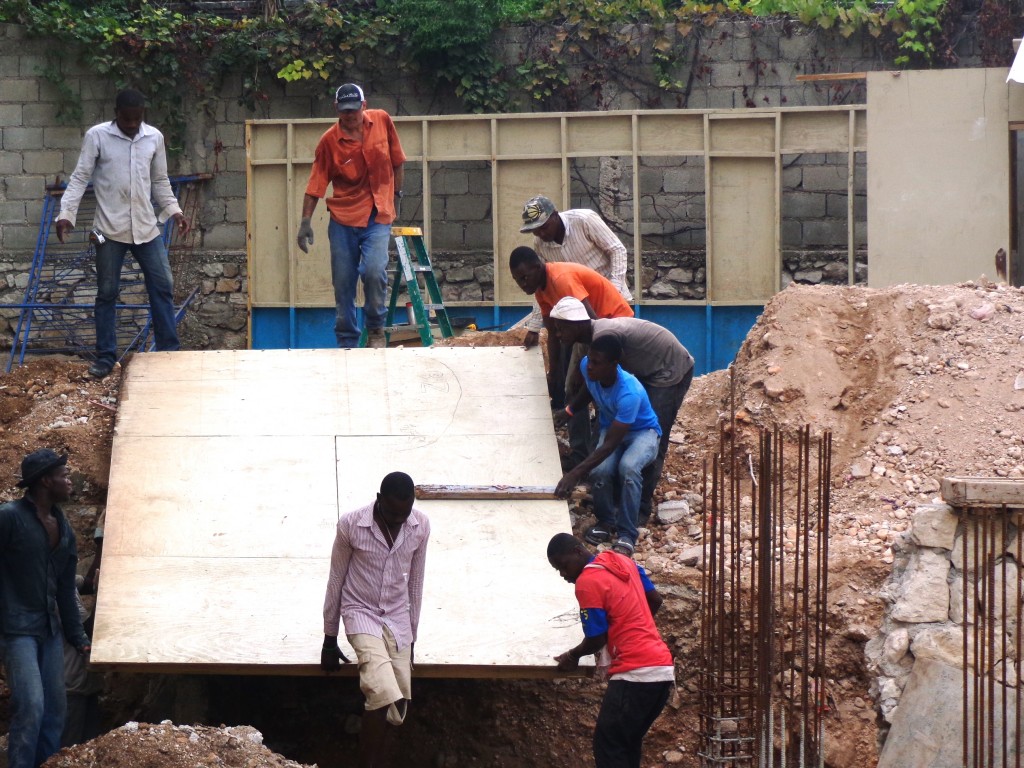 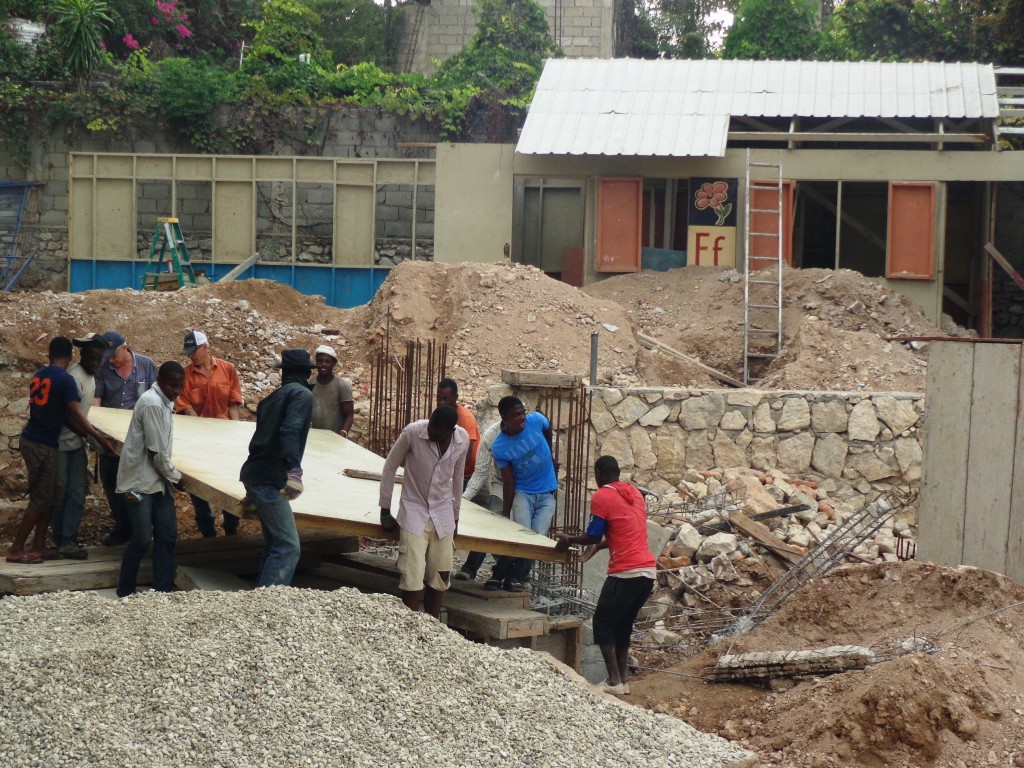 The team is demolishing the walls and the roof of two prefab classrooms. 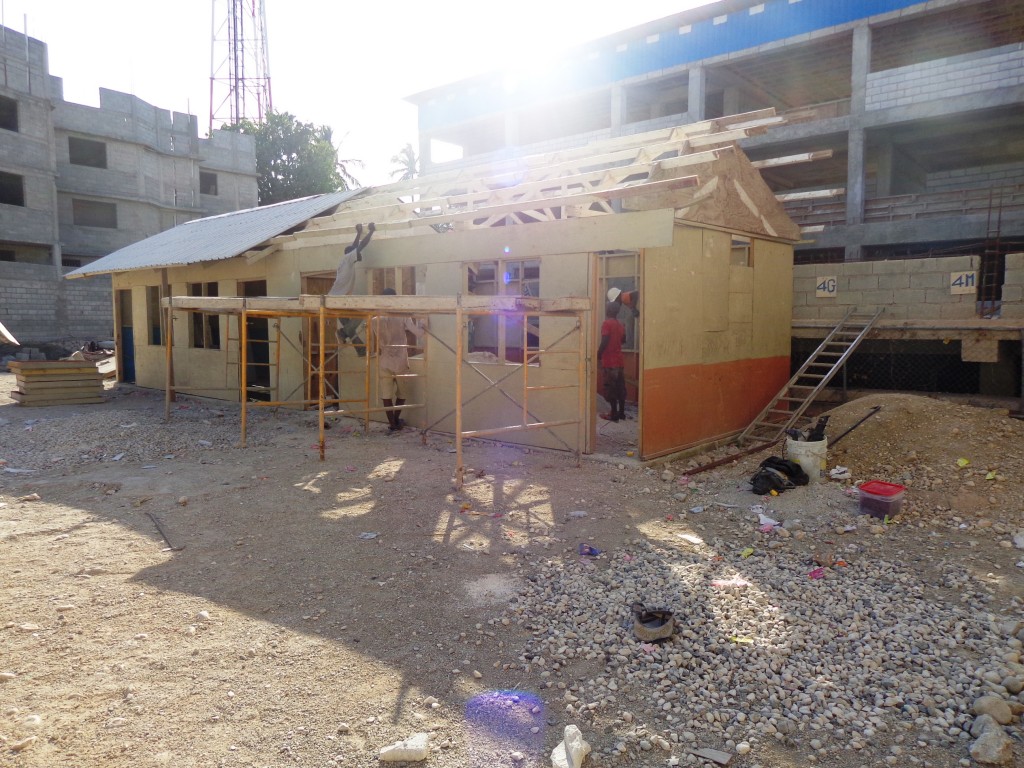 They are rebuilding them in another area of the yard. 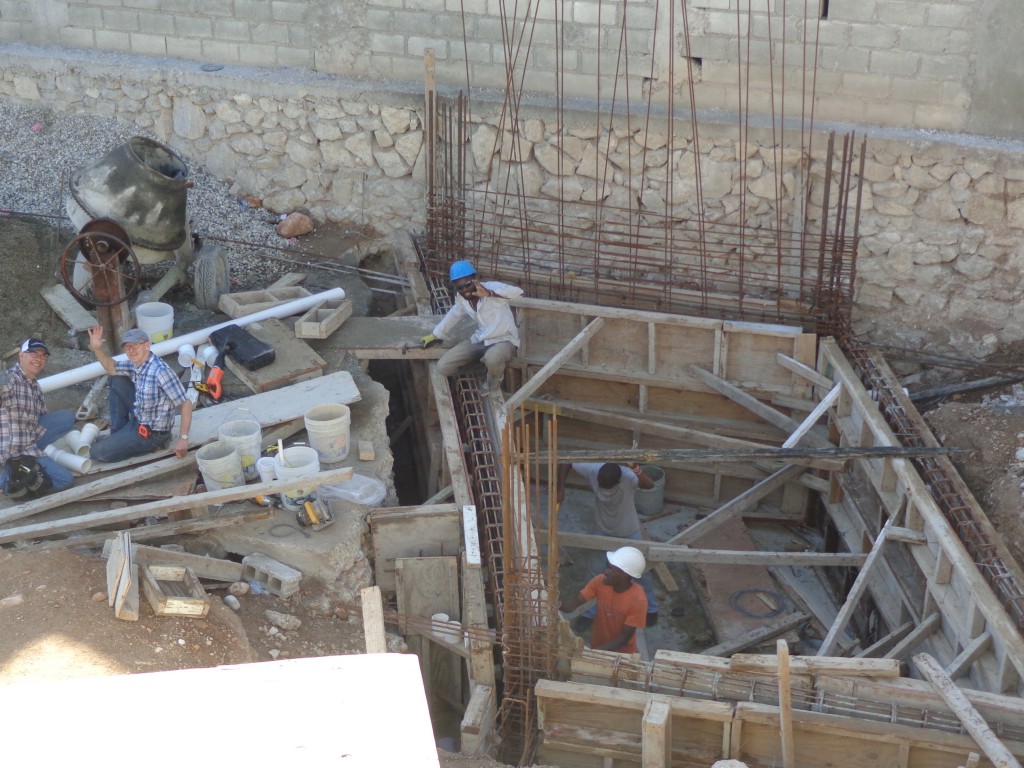 They are working on the septic tank.  However, the project was not ready for them to fix the toilets. Alain, a plumber by trade, replaced many broken pipes that collect rain water.  Now, our cisterns can collect lots of rain water. 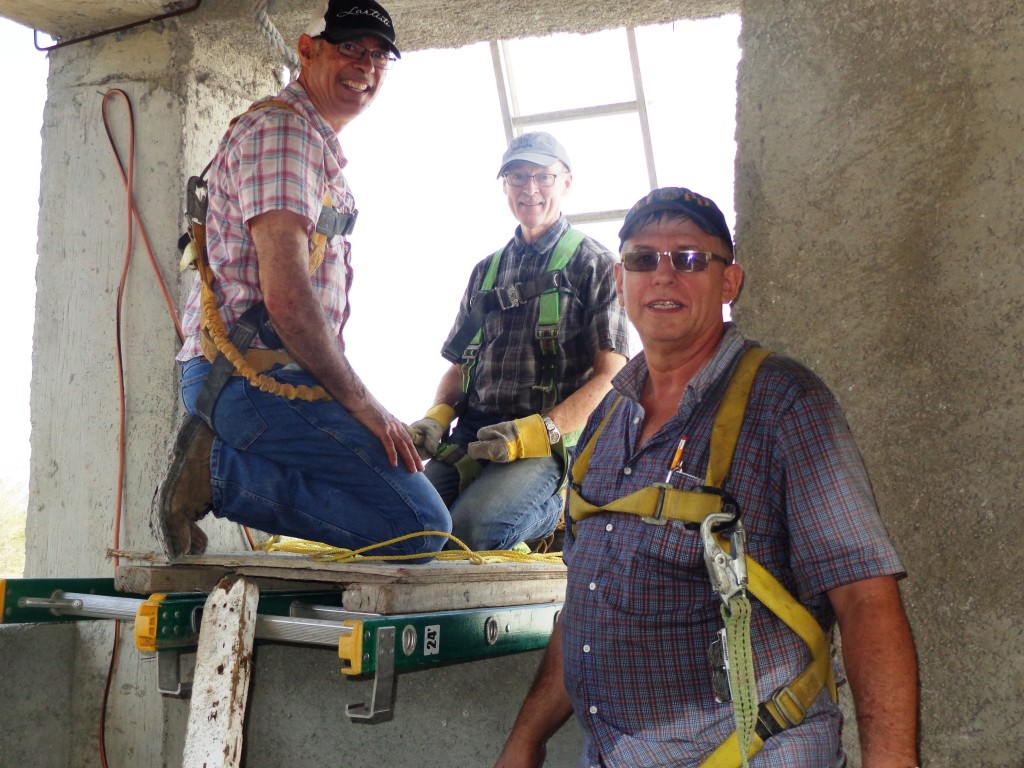 Réjean, Alain and Mario are installing two solar panels, on the school’s roof, to feed into our security camera system. 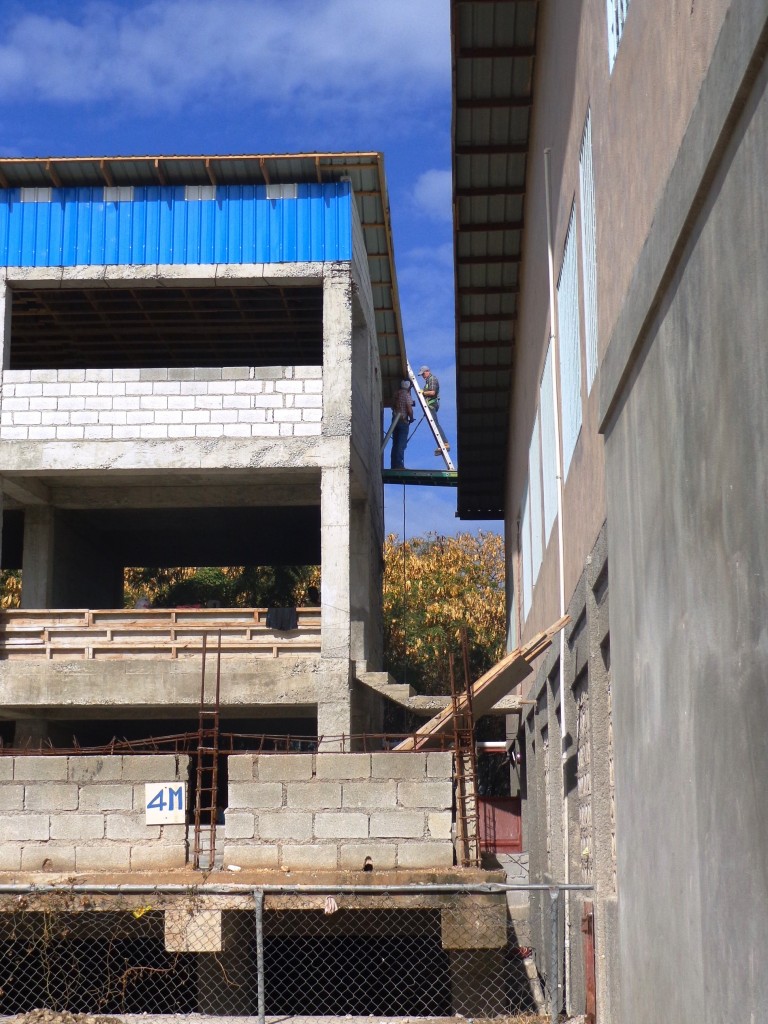 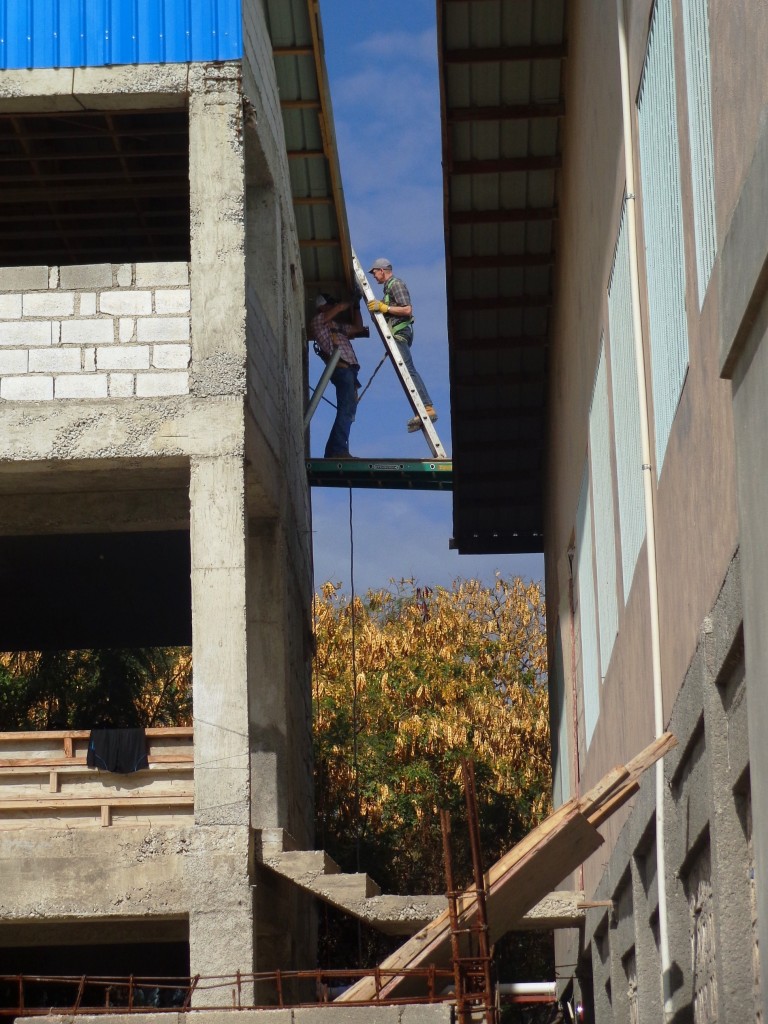 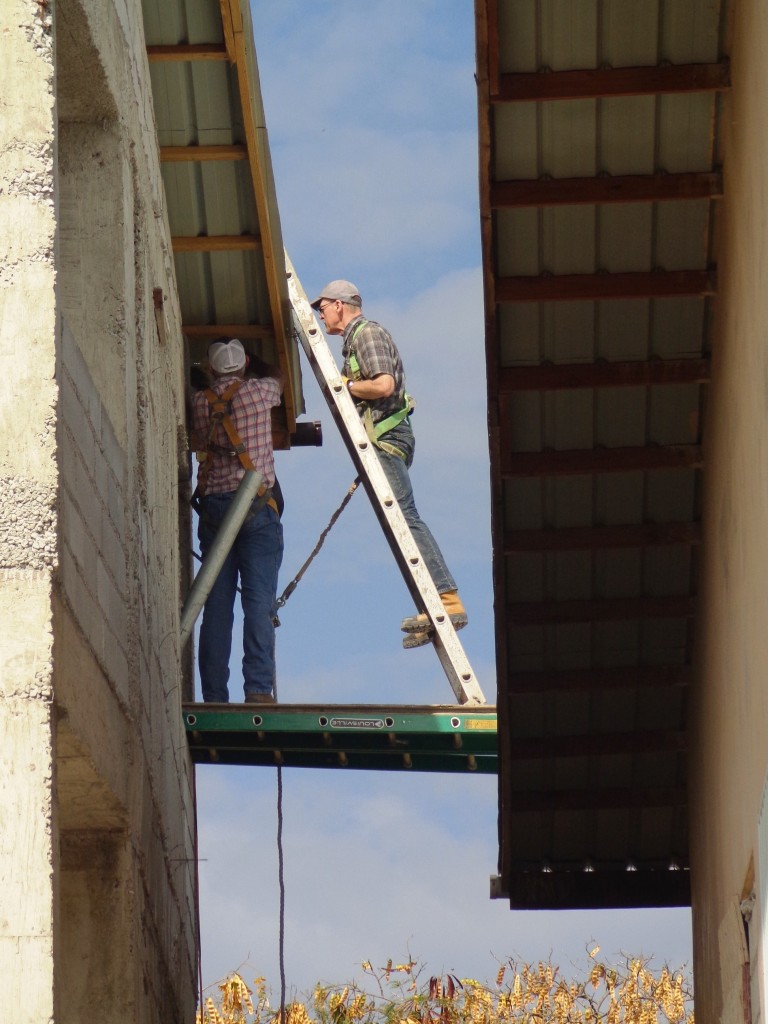 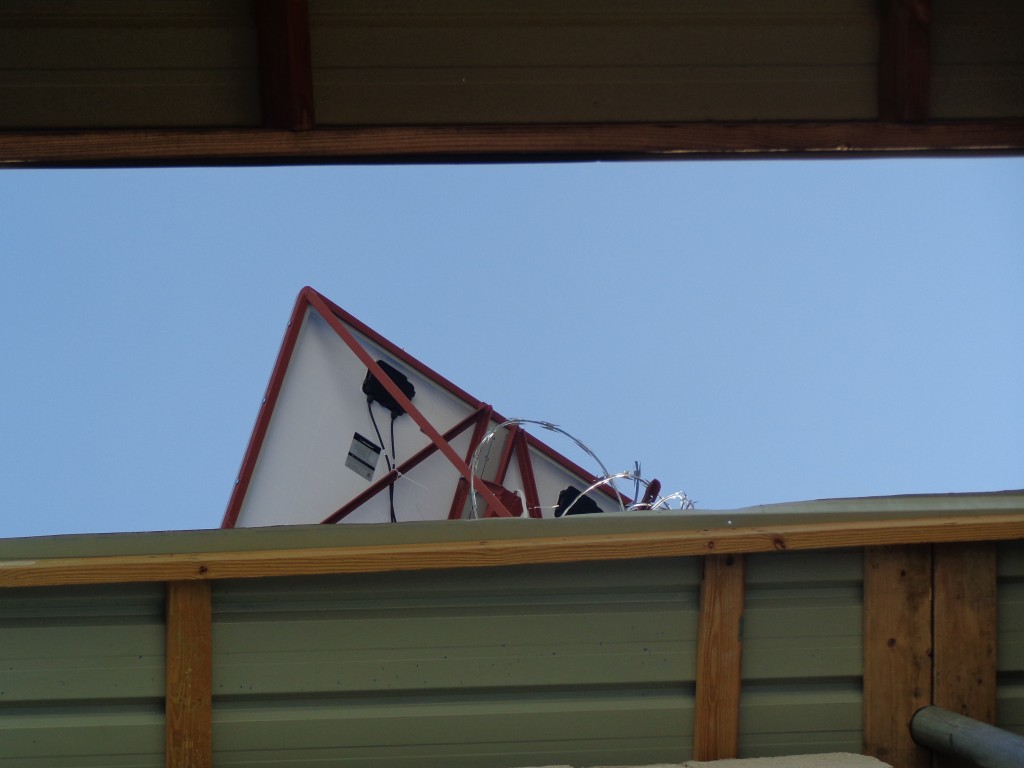 The solar panels are on a third story tin roof and are protected by razor wire. 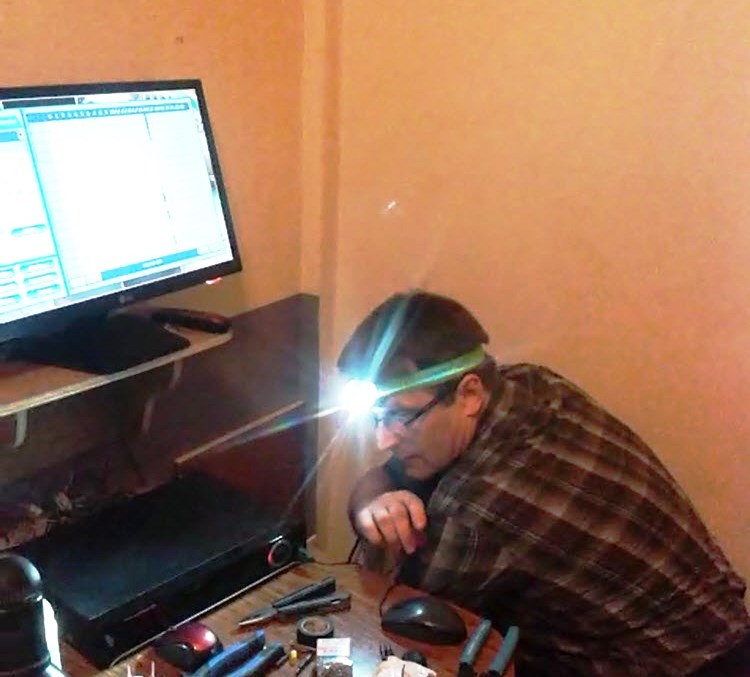 The security system worked for us for one week, but on the eighth day, someone broke into Michel’s office at night cut the wire and stole the video machine and a small inverter.  “The thief comes only to steal, kill and destroy; I have come that they may have life, and have it to the full”. John 10, 10 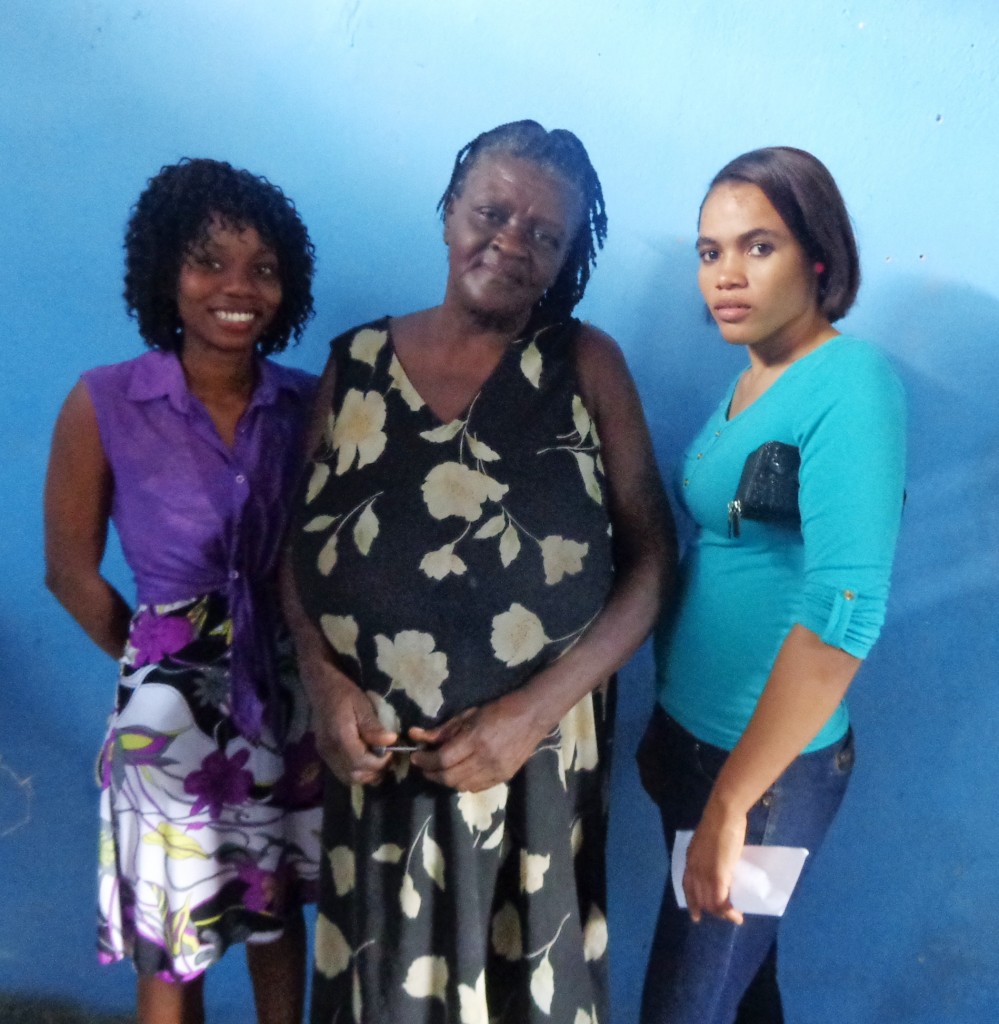 Yesterday, while doing visitation and evangelism, we arrived at a small corridor at the end of which there was something unusual to the point that one of us said she no longer wanted to continue. But another insisted that we continue on because a Christian family lived at the end. Therefore, we pursued. We passed the unusual thing and were able to speak with the mother and children. The mother said that this item had been put there by her neighbor and that she did not mind. Thank you, God, because it really bothered us. It was a human skull placed on a small cross with an empty tin crowning the skull. After having prayed for the family, we continued farther and prayed for a lady who has had a pain in her side since January 12, 2010. After prayer, she confirmed that the pain had left her. « This is the message we have heard from him and proclaim to you, that God is light, and in him is no darkness at all ». (1 John 1:5) I thought about photographing that unusual thing, but the last time I did it, my camera broke.

Thanks for your prayers, for your contribution and for your compassion for the Haitian children. We want to see God’s glory.