We went out into the streets and in the ravines to invite the children for a concert. We prayed for the sick and some were healed.  The staircase in the picture shows one of the routes we took.  It has around eighty steps.  Not easy to escape in case of troubles!  But the people gave us a warm welcome. 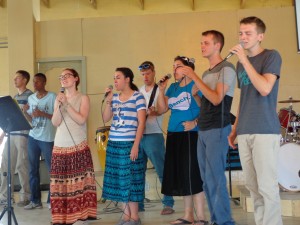 A joined team from Edmonton, SK and Shawinigan, QC, held a concert and two summer camps at our church. 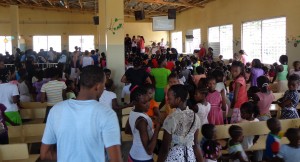 During the children’s concert 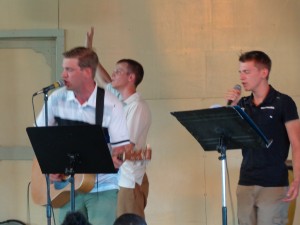 Pastor Lorne, who travelled across Canada in the past with a musical band, edified us with anointed songs. 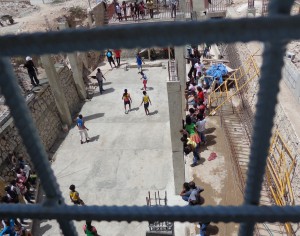 Every day, after the camp, we had soccer competitions.  The Haitians were very proud to beat the Canadians. 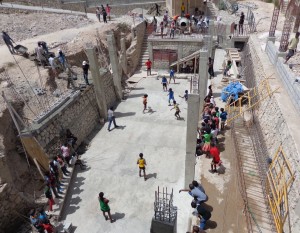 The dining area improvements continued during our soccer competition. We serve six hundred meals three days a week at the school and eight hundred two times a week at the church. 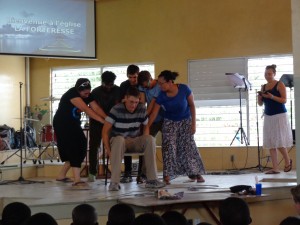 The team that visited with us performed a drama called “The Chair”.  Everybody that touched the chair stayed glued to it as we are glued to sin until Jesus enters our lives. 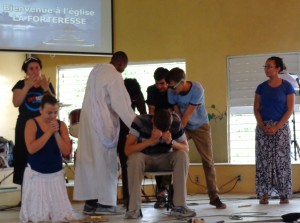 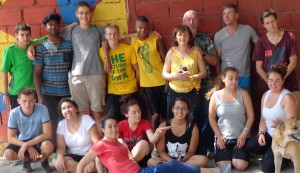 Team picture in our backyard. 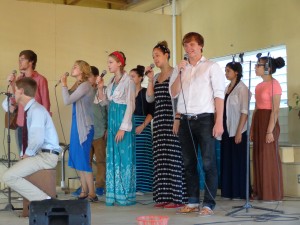 A group of Americans sponsored by World Vision in Haiti gave a mini concert at our church.

Someone on the team had a vision before coming to Haiti; he saw a small boy wearing a yellow t-shirt who was healed. One day, before the team sat down to eat at a restaurant, a child in a wheel chair entered; he was wearing a yellow t-shit. Our team member went and prayed for the boy, but nothing happened. On Sunday morning, we prayed for a different boy in a yellow shirt and he was healed from persistant abdominal pain.

Please pray for peace in Haiti.