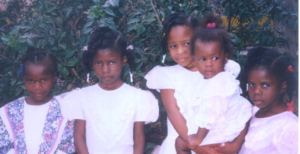 Jessika Pierre (center) was eleven years old when her mom sadly died due to an AIDS infection. She left behind five girls and one boy.  Christella, the youngest one who appears in Jessika’s arms in the picture, died of AIDS at an orphanage when she was 5.  The little girls all attended our first church service in our backyard on October 1997. From left to right: Sandra, Johanne, Jessika, Christella and Guerdy. Sandra was abandoned in the street by her birth mother at the age of three. Jessika’s mother took her into her home.  Unfortunately, Sandra never walked with the Lord.  Christella and Guerdy’s father was assassinated down the street from our house in the middle of the day. 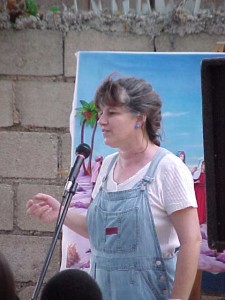 On October 1997, we had 30 children attending our first church service in our backyard. The next week, there were 60, the third week, 90 and the fourth week, 110. Louise would lead in worship and preach. 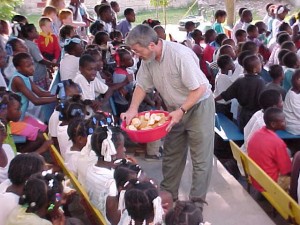 Michel would preach and give out food. 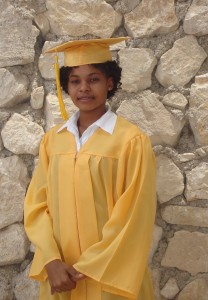 Jessika and her sisters are still or were all sponsored through CCP. Jessika was born in Barbados but her mother returned to Haiti with her.  After graduating from grade 13, she was hired as a teacher at The Fortress school, where most children are sponsored.  In the morning she teaches, and in the afternoon she takes courses in education.  She will graduate this year.  Jessika and her sisters are a good example of the help Child Care Plus brings to the orphans and to the needy children. 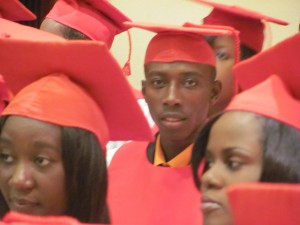 Jean-Philippe Alphonse grew up in a disfunctional family. His father abandoned his mother and their five children when Jean-Philippe was only 12.  He was the oldest one.  His mother had to manage by herself to feed them.  They did not have food every day at home.  But due to Child Care Plus, the five of them were able to achieve their high school. After four years, Jean-Philippe completed his studies at the Graduated Institute of International Studies. He then started working as our church and school administrator. This September, he returned to university to study in education in order for him to become our school principal one day 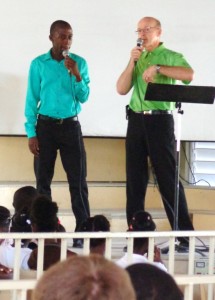 Jean-Philippe speaks at our church once a month, he does home visitations and he is in charge of buying the schoolbooks and supplies. 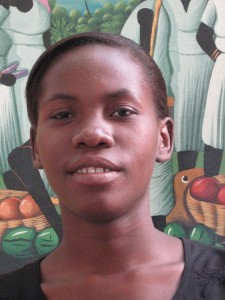 Roselaine François’s father had two wives. He preferred his other children to Roselaine.  She felt rejected. But despite that, she loved her father and it took her a long time to recover after he deceased. 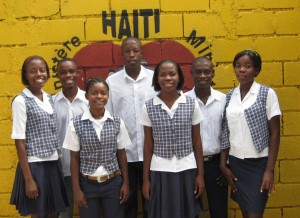 in this picture, Roselaine is the fourth one from the left.  She was sponsored until grade 13.  Then, she got a scholarship to study in Education at the University of Quisqueya. A year ago, she got married and she delivered a beautiful boy a few weeks ago. Roselaine is presently our Assistant Director.

In October 1997, we started a children’s church in our backyard.  We began feeding them from the beginning.  From September 2013 to September 2014, we served 210,000 hot meals both at church and at school.  Right now there are 255 sponsored students in Junior High and High School.  There are also 420 sponsored students from 1st grade to 6th grade and 48 sponsored students in kindergarten. But 120 children are still waiting to be sponsored.  The CCP program employs 28 teachers.  There are two nurses to give medical attention to the children. They also teach the Bible course. We also have a receptionist, a janitor, an administrator and an assistant administrator.  We plan on hiring a physical education teacher in 2015.

We just finished pouring concrete for the dining area’ roof that measures 12 meters X 22 meters. We are also building ten new classrooms, a library, an infirmary, a laboratory, a small pharmacy and two rooms for Dr Jalbert, the Canadian dentist who comes to Haiti every year. The roof will be used as a soccer field. 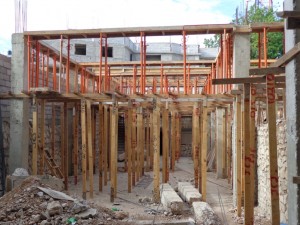 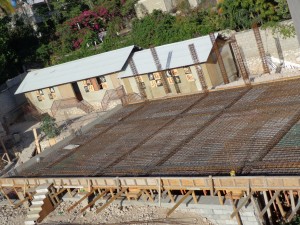 It took weeks to our workers to tie the re-bars together before the concrete was poured. 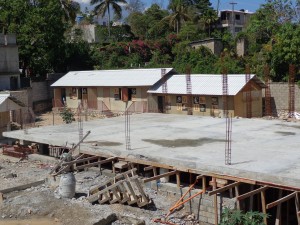 Through the years, the missions teams have played an essential role in our ministry.  They made and painted most benches and tables, they built the roof of our main sanctuary and they did hundreds of other things that it would be too long to enumerate.  Without them, we would not be able to make it.