A Month After the Earthquake

Over 217,000 families and friends are mourning their lost loved ones. We must remember that God did not abandon us. He is here with us and he wants our hearts. 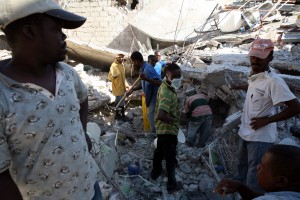 A lady told us that the house where she worked on the day of the earthquake collapsed on her. She was captive under the rubble for fifteen hours, her body was folded in two and her right arm was hooked on some debris. After every aftershock, she thought she would fall deeper. The night before, she had a dream. In her dream, she saw a person who held her by the waist and pushed her to fall forward. And she saw a valley of straw hats, representing the valley of death. But all of a sudden, a supernatural power helped her to straighten in a sitting position, and the dream vanished. Her brother with some friends went to her rescue by breaking the cement roof that covered her. They also cut the metal bar that kept her captive. When she came out, everybody believed it was a miracle.

Four weeks after the disaster, a man was found under the rubble of a market. How did he survive? He said that a man wearing a white coat would bring him water from time to time. Several bodies have been found, and teams work to clean the streets from the rubble. Michel said that downtown many buildings have collapsed and that the smell of death is still in the air. 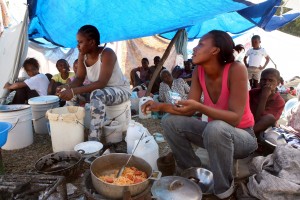 According to Radio Kiskeya, the number of casualties is estimated at 217,000. No one can estimate how many people have disappeared. Over 300,000 people are wounded, of which 4,000 are amputees, and 1,3 million people have been displaced.

The rainy season is coming. How will the parents protect their children from the heavy rains with a bed sheet as a roof? CRI (Crisis Response International) gave us food, medication and fifty tents that can house ten to twelve people each. People sleep in the streets, parks, gardens and parking lots.

Our plan:
1- Provide shelters to the disaster’s victims, such as tents and tarps.
2- Fix the houses that can be fixed and rebuild those which have collapsed.
3- Build a school at our new site by the month of September. In Port-au-Prince, only a few schools are presently functioning. 75% of the schools are destroyed.

As funds come through ERDO, we will continue to provide food, clothing, and medical care and start rebuilding and fixing houses. 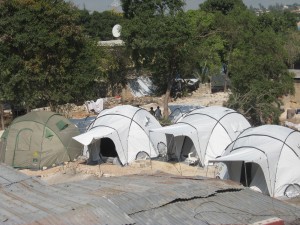 Tents, for the homeless,  stand up like igloos under the tropical sun. 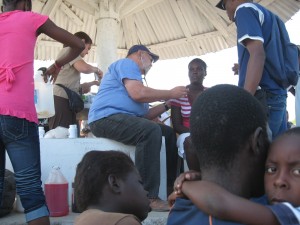